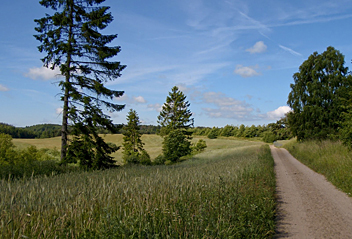 This trail is constructed to be part of the E1. The trail is named after the peninsula of Mols.

There is much to see along the 80 km long Molsruten. Grenå is the easternmost tip of Jutland, and extends far out into the Kattegat. Starting in Grenå, the trail follows the coastline south. This section goes alternating through forest and agricultural land.

The path turns westward inland. The area you are entering now is an impressive example of the power of ice. During the last ice age this area was the limit of large ice masses. They left behind a complex set of moraines. In some places the ice remained long enough to create deep ice holes. These Mols Bjerge (up till 137 m in height) are a National Park nowadays.

There is plenty of accommodation along the trail.