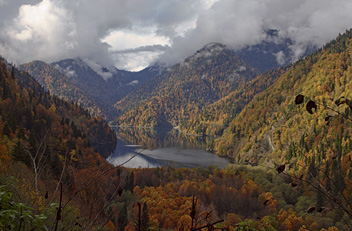 Abkhazia is located on the Black Sea coast, and has declared itself an independent republic, although the majority of the world's countries consider it part of Georgia.

Geographically Abkhazia in dominated by the western reaches of the mighty Greater Caucasus Range, which runs all along its northern border with Russia. Abkhazia's highest peaks are in the northeast of the country, and rise up over 4000 m. Abkhazia has a series of deep valleys and gorges cut out by numerous large and small rivers running from north to south, and several lakes high up in the mountains, such as Ritsa Lake. Climate varies from subtropical on the Black Sea coast, to alpine in the north with glaciers and lots of snow in winter.

Although there must be wonderful opportunities for discovering the valleys and mountains of the Abkhazian Caucasus on foot, very little can be found on the web.